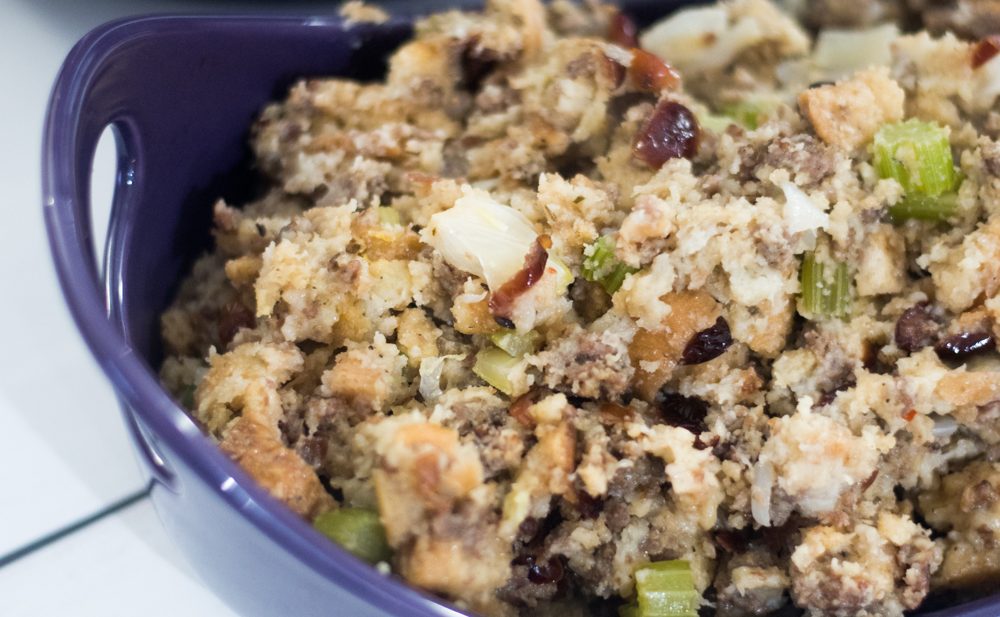 Signup to always have the latest and greatest side dish recipes that always disappear first!

This Instant Pot stuffing recipe will leave everyone asking for the recipe as it takes center stage at your next gathering. Filled with sausage, cranberries, onions, and celery – you’ll definitely be wanting seconds!

I feel like it’s one of those overlooked Thanksgiving dishes.

Not very many people say, “Oh man, stuffing is my FAVORITE part of Thanksgiving.”

But if there’s no stuffing…everyone notices!

Over the years, I think I’ve become a bit of stuffing snob.

I really like it to have big pieces of bread and an amazing flavor.

But I also don’t like going to the effort of saving bread and cutting it up.

The secret for me is starting with a quality stuffing mix and then adding fresh ingredients from there.

This year, I decided to try out stuffing in my Instant Pot, and it did NOT disappoint.

The pressure from the Instant Pot allowed the flavors to meld together perfectly, and I couldn’t get enough of it.

In fact, by the time we sat down to eat, I wasn’t even hungry, because I had been snacking on it for the hour or so before.

A few things to keep in mind

When making this in the Instant Pot, you have to use the Pot-in-pot method. Otherwise, you will end up with a burn notice (and a burned pot).

Trust me – I learned the hard way.

If you have a bundt pan that will fit into your Instant Pot, that can be a good option (here are a bunch that would work).

Otherwise, a glass pyrex bowl is what I used!

This recipe below makes A LOT – and if you make it as stated, you will likely have to do two rounds of cooking in the Instant Pot and then combine it all together in some kind of baking/serving dish.

If you are serving a smaller crowd, you can easily half this recipe, which would serve around seven people.

I also used the Mealthy CrispLid on top of my instant Pot to crisp it up a little bit and absorb some of the liquid toward the end. This worked perfectly (and if you want one, use the code CLARKSCONDENSED for $10 off orders of $59.95 or more).

HOWEVER, if you don’t have a CrispLid, once you’ve transferred everything to a baking/serving dish, just put it under the broil for a minute or two.

You can add whatever you’d like to your stuffing. In our recipe below, we added celery, onion, sausage, and cranberries. Here are a few other ideas:

What stuffing mix should I use? That is up to you. I used one that used Foccacia from Williams Sonoma. I recommend getting one that has larger cubes of bread.

Can I use my own bread? Sure! You can dry out your bread of choice and season it – I definitely recommend using sage!

Do I have to use sausage? No, you can omit that if you like. I think it’s rather tasty, though!

How can I reheat this stuffing recipe? Here is a great tutorial on how to reheat stuffing without drying it out.

Can stuffing be frozen? Yes. Freeze in small portions in a freezer-safe container for up to three months.

Can you make this the day before? Yep! Just refrigerate in an air tight container and reheat the next day.

How much stuffing should I make? This recipe makes about 10 cups. I typically suggest 1/2 cup per person, so you can adjust the recipe based on that.

What kind of sausage did you use for this recipe? I just used Market Pantry mild ground sausage!

Be aware that if you make this recipe as written, you will need to do two batches of pressure cooking.

Turn Instant Pot to saute and brown and crumble the sausage.

Add in butter, celery, and onion and saute until soft.

Spoon the stuffing mixture into an Instant Pot-safe dish.

Place trivet in the bottom of the Instant Pot and pour two cups of water in.

Place dish on top of trivet.

Once timer goes off, quick pressure release all the pressure.

Crisp with the CrispLid or in the oven on a broiler setting.

Welcome to Simply Side Dishes! Here you will find side dishes of all kinds for all occasions. We believe that side dishes are the heart of any meal, and we hope that you’ll find the perfect dish here. Whether it’s for a party or just a weekday dinner with your family, SSD is here to help!